Why do our government and tabloid press demonise refugees?

No doubt you’ve seen the crocodile tears of some of our tabloid commentators concerning the death of 27 people in the English Channel (technically in French waters) on the night of Wednesday, 24 November. They included a young Kurdish fiancée, four other women and a little girl, and possibly an Afghan interpreter who previously worked for the British and should have been repatriated here.

There have been some galling takes from the usual suspects. Alex Wickham, who seems to delight in whipping up anger and division by deliberately misinterpreting texts and/or situations (see the fuss made over his rotten translation of a letter to the EU from French Prime Minister Jean Castex), felt vindicated:

“Hopefully an end to the unbelievably crass and out of touch twitter hot take that the small boats crisis is a non-issue being exaggerated for political reasons,” he tweeted.

Hmm. Methinks young Alex is being disingenuous (again). The concern of Priti Patel and her acolytes is not for the peril of the crossing, but rather that people have the nerve to attempt it in the first place. After all, closing all safe legal routes to becoming a refugee in the UK should have been enough of a hint that she doesn’t want them here. How very dare they look at the sunlit uplands of Global Britain and say, “I want to live there, work there and raise a family there, instead of staying in the hell-hole bombed out with British munitions”?

Is this an unfair characterisation? What’s the evidence? Last year the Home Office considered building a floating wall in the English Channel, until somebody (probably not Dominic Raab) pointed out to them that it’s one of the world’s busiest shipping lanes, so we can’t do that. Next it was nets, but we couldn’t do that either, for the same reason. Patel also considered housing asylum-seekers on disused ferries (Chris Grayling can get his hands on some of those, apparently). In July Patel tried to revive the previous year’s zombie plan to create off-shore asylum centres on Ascension Island, 7,000 miles away from UK in the middle of the Atlantic Ocean. She had another go at ‘offshoring migrants’ again this autumn, switching out Ascension for Albania, only the story was leaked to The Times before discussing it with their government. Oops. That didn’t go down well. In October we learnt that Boris Johnson’s government looked at using water cannon to create waves to push back migrant boats crossing the English Channel.

It’s all rather silly, expensive and inhumane, and shows Patel cares only about fulfilling her role as Britain’s self-appointed bouncer. Most Brits trapped inside Club Brexitannia look on in horror as elite Brexiters get drunk on anti-immigrant ideology and vomit all over their gaslit lackeys. The queue kept at bay outside in the wet, the wind and the cold is meant to give the club an air of being better than it is, but all it achieves is to ruin its appeal for the clientele (eg top scientists) it wishes to attract.

Sadly, this latest incident has seen even so-called liberal voices like Matthew Parris giving in to the myths perpetrated by Patel, her acolytes and the right-wing press (85 per cent by circulation) of an “invasion” of migrants who threaten to “overrun” us. Parris says the facts don’t matter. People don’t care that the French take a third more refugees than we do, and Germany over four times as many, or that they are far more generous to refugees than we are. It is simply not true that refugees are coming here to leech our benefits system, but it is a fact that we are taking fewer refugees now than we did twenty years ago. These commentators would rather believe the lies, it seems.

But surely it does more harm than good to allow the lies of unscrupulous politicians and toxic tabloids to run amok, unchecked? We were once told that the benefit of Brexit would be that politicians wouldn’t be allowed to hide behind the EU any more, and would be accountable for their own mistakes. Look at the colossal error Johnson made with his oven-ready deal. Is he owning up, or is he blaming the EU? Similarly, if we don’t hold politicians accountable for lies they tell about migrants, are they likely to own up to problems with over-crowded schools, hospitals and housing being due to under-investment and/or corrupt contracts, rather than immigration?

Brexit has shown us that migrants weren’t stealing British jobs and that we’ve got more jobs vacant than we’ve got workers to fill them, but will politicians ever admit it? Or admit that the British economy needs migration to fire on all cylinders and provide the level of economic prosperity the country has become accustomed to? (Even if the distribution of that prosperity is unfair, which is an entirely separate issue.) Of course not.

Another danger of allowing Patel and her ilk to perpetuate these myths is that she’ll use it as an excuse to strip us of yet more of our sacred rights and freedoms. She crowed when she stripped us of our freedom of movement rights, crushing millions of jobs, careers, chances, aspirations and dreams for Brits, who lost opportunities in thirty-one countries, compared to EU and EFTA citizens who only lost it in one.

It is a false narrative. What constitutes a crisis is the method of arrival rather than numbers arriving. Refugees are resorting to unsafe methods that risk their lives because this government has left them no alternative, and because, in the case of Afghanistan, it has failed to live up to its commitments and has abandoned people – to whom it owed a moral duty of care – to face Taliban murder squads.

I met with an Iraqi refugee who made it from Baghdad to Calais by road, by rail, by boat, on foot and eventually to the UK by an illegal crossing across the English Channel. He told me everyone gets robbed or scammed along the way. Every woman is raped. Nobody embarks on this journey unless they are absolutely desperate.

Maybe instead of a political football, or worse, a racist dog-whistle that Johnson blows whenever he needs either to shore up his support or to distract us from something bad he’s doing, (like trying to sell off the NHS), we could consider migration as a humanitarian issue?

We could mention the contribution refugees like Michael Marks made to British retail, that Freddie Mercury, Rita Ora and Dua Lipa made or are making to British music, that Sir Mo Farah is making to British sport, that Judith Kerr made to British children’s literature, or that the Miliband brothers and Sheffield’s Magid Magid to politics, or the many other refugees who have found fame and fortune on our shores. Far more important is the unsung contribution of hard-working refugees like my grandmother, who fled the Spanish Civil War and always had two or three menial jobs on the go to house, feed and clothe her family. Jobs British people didn’t want to do. There were certainly no benefits for the taking.

For those who’d like a less jaundiced, more rational view of refugees, the London Migration Film Festival, which is on until 1 December, is a good port of call. Away from the hubris and hostile agendas of politicians, filmmakers offer a more human take on the situation, telling us the stories of the people involved, treating the issues with greater objectivity, curiosity and impartiality. It would be wonderful to see more initiatives like this, so that people could be given the chance to overcome the prejudices that unscrupulous politicians and journalists seem so determined to seed and entrench. 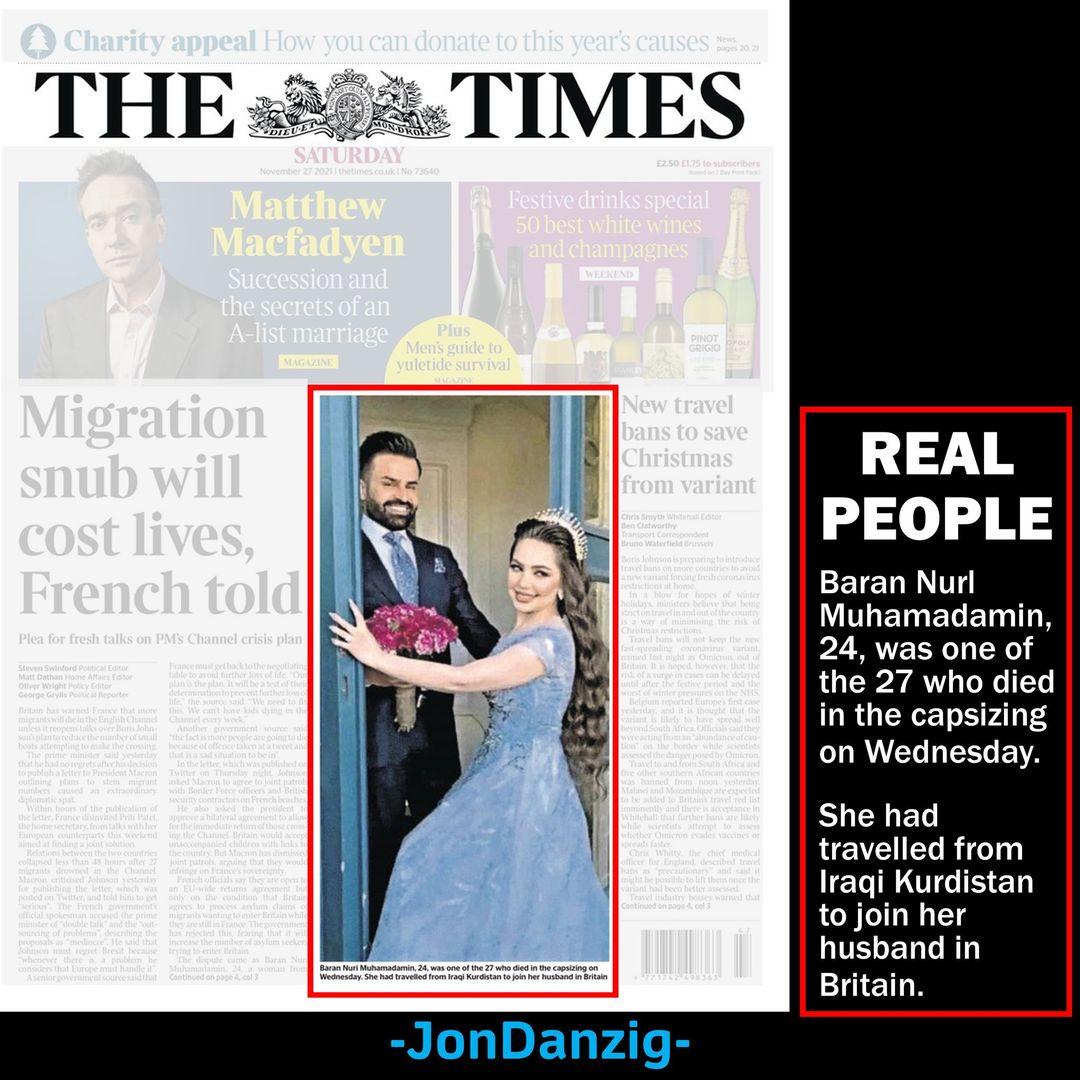 “She wanted to be with her husband in Britain”