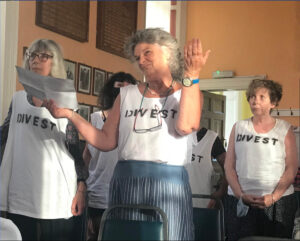 Police were called last night as climate protestors interrupted a Town Council meeting in the sleepy market town of Helston in Cornwall. 18 protestors, wearing vests which read “Divest”, were asking councillors who are trustees of the Downsland Charity to remove their considerable financial reserves from dirty oil and put the money (shortly to be […]